It’s been a busy couple weeks at work, at home and in the garden, so luckily things have been going along without a hitch in the carboys. 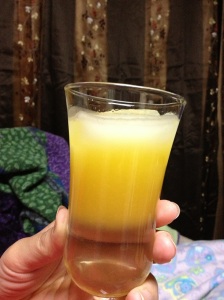 The end of last week, my fig leaf liquor finished its month of aging. Kim and I took the evening and sampled the different varieties, and each found different preferences. There were three bottles, one with a vodka base, one with a gin base and one half-and-half of each. I preferred the vodka, no surprise. Kim actually preferred the vodka/gin combination. I found the gin to be pretty harsh tasting. Maybe some additional time will improve it, though I doubt it.

Even the vodka wasn’t quite as good as I had hoped it might be. I used cheap vodka and gin, rather than the expensive vodka that I had used last time (we’re talking the difference between $12 and $50 for  1.5L). While the last batch was excellent, this was much less so. The cheap vodka is definitely detectable in the flavor, whereas it was not before. That being said, it was still good. Especially with chilled pineapple juice.

For whatever reason, Kim’s juice didn’t quite mix with the liquor. But mine blended nicely.

This weekend, we set about putting in the posts for our muscadine trellis. The holes are dug, at least. That was some hard, hard red-clay! Anyway, we plan on a T-trellis, which should allow us to double up the range of the vines. We picked up most of the stuff – the wood for the poles and braces, the cement. I still need to pick up the wire to hang the vine on.

Which brings me to today. Everything is doing what it should: bubbling, clearing and the like. Nothing really ready for bottling. The honeysuckle mead is clearing quite nicely, but has a huge layer of lees. I’ll probably need to do something about that soon. 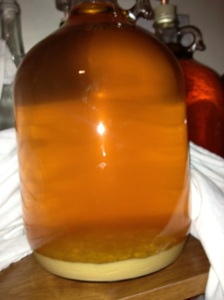 Clear With A Bed Of Lees

It’s been so busy that I haven’t been able to use my grains to put together the next batch of braggot. So I found myself with some time, and set the process in motion. The recipe I used comes from The Compleat Meadmaker, a “Hefty Braggot” from the end of the book, which follows “all-grain” brewing principles. How to Brew has made that make a little more sense!

Anyway, the recipe called for bringing 11 quarts of water to around 180F (and another 3.5 gallons to 185F, for sparging). Once it was up to temperature, I removed from the heat and added the grains – 8 pounds of pale ale malt, 2 pounds of Vienna malt and 1 pound of dextrin malt. The grain barely fit, but it fit. It was supposed to rest for 30 minutes at around 146F, but I could never get it really to drop that low. It spent 30 minutes closer to the vicinity of 155-160F. The recipe then called for mashing out to 165F, which I forgot to do. But I doubt it really matters since I never got to the lower temp desired anyway.

At this point I added 3 ounces of Cascade hops to my fermentation bucket. It was the perfect size for sparging, and I intended to use the same pan I had rested in to do the hops boil, so needed to transfer to something else. Sparging went well enough, but it quickly became clear that I had more liquid than would fit in the one pan for the boil. I used my other big pan (which has some issues when used to cook more solid or chunky things). Brought them to a boil and kept it at it for an hour. Thirty minutes into the boil I added the next hops in the schedule (1 ounce of Cascade), and then I added another ounce of Cascade two minutes before the hour elapsed.

Quite a bit of water boiled away (1-2 gallons!), so it all fit in one of the pots, which I placed in an ice bath to cool quickly (based on reading about the cold break in How to Brew). It did help it cool down faster, but it wasn’t all that fast. But I went ahead and cleaned up all the rest of the equipment. I added the 9 pounds of honey that the recipe called for to the fermentation bucket. And once the water had finally cooled to about 80F (was hunting for 70 per recipe, but in all reality that’s lower than room temp right now), I added it to the fermentation bucket with 2 tsp of yeast nutrient and 2 tsp of yeast energizer. To get to just over the 5 gallon mark, I had to add another gallon of water.

The resulting SG was less than the recipe suggested. I measured 1.110, and the recipe called for 1.120. I am guessing that my high temp mash-in is the culprit, not allowing quite the right starch conversion. But I’m still fairly happy with 1.110.

I’d say there were some definite scary moments this batch. I think if I had been just a little less careful, my spoon would have melted completely. As it is, it is a little discolored and has some spots where it is peeling. I was really worried by the amount of liquid after sparging… it was over five gallons without the addition of honey! But the hops boil took care of the overage; maybe a little too well.

And I remain a little concerned about the yeast. We’ll see what we have in the morning. I expected a little bit more of a bready smell when rehydrating and pitching the yeast. But it was actually more of a sweet/tart smell. I may have to re-pitch the yeast if they were somehow compromised. Not that concerned, but I will be keeping an eye on it.

No burning this time, so the new pan was a great success! I’ll just have to keep in mind that the new pan isn’t big enough to do the hops boil after sparging. More convenient to have separate pots for those two operations anyway.