Continuing the recount of June…

My mint liqueur has finished maturing, but I have not really had an opportunity to check it and see how my test results will come out. And it will likely be a while… But in the mean time, the fig liqueur has been excellent. I found that beyond pineapple juice, I also like it with pomegranate juice.

Walking through Whole Foods Market on a date with my wife, we found a really good deal on some nearly ripe pineapples. So we picked up five, since I knew I had a recipe for pineapple wine, but didn’t remember how much was needed. e brought them home and let them age some, till finally they were ripe and ready to be chopped up. That would be the 13th of June.

Turns out that the recipe called for 4 pounds of chopped pineapple, and three of the 5 sufficed to provide that. I placed them in a mesh bag, that at the bottom of a fermentation bucket, and then took a masher to the fruit, ending in a pineapple slushy. While this was going on, a quart of water was put on heat, and 2 cups of sugar. Better reading would have told me that was not nearly enough sugar. But we’ll get there. 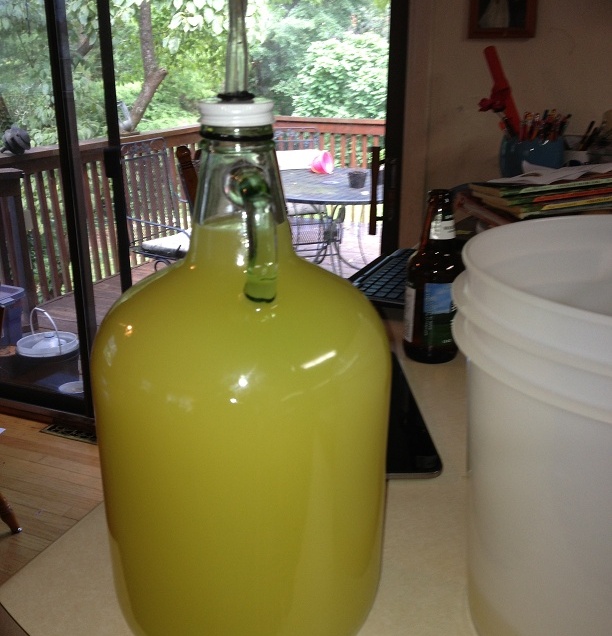 So, with pineapple mashed and sugar-water ready, I added the water to the fruit in the bucket, plus an additional 2 3/4 quarts of cold water (the hope being to get the temperature right from the start). Unfortunately, it still ended up at 95°F, so I let it alone for a while to cool. That didn’t go so well, so a couple hours later it finally was down to 75°F.

At that point I added 1 tsp yeast nutrient, 1/4 tsp tannin, 1/20 tsp of potassium metabisulfite, and a 1/2 tsp of ascorbic acid. I left that to soak  a minimum of 12 hours, typical after the potassium metabisulfite. The next morning, time done, and having realized my mistake with the sugar, I mixed in another 2 cups of sugar to make it to the 2 pounds I should have been shooting for all along. I then also added a 1/2 tsp of pectic enzyme, measured the SG (1.081), and left it to sit the standard 24 hours to do its thing.

Having a lot going on the next morning, and forgetting in the early afternoon, it was early evening before I then added the yeast. I used one dry packet of Pasteur Champagne, rehydrated per the package directions. All that went without any hitch. But, as I went to add the yeast to the must, I found that there was quite a bit of bubbling going on already – a rather thick foam. Which likely means there was already some fermentation going on. I checked the SG, which came to 1.075, confirming the likelihood of some “wild” fermentation. Hopefully the added yeast will overpower and prevent any off flavors.

On the 20th, I found the SG at 0.950. There wasn’t much airlock activity, so it was time to rack. I racked to a 1G jug that evening. I di try some. Warm, which didn’t make it all that pleasant, fairly dry, but noticeably pineapple, a good thing in my mind. It’s still very cloudy, but I expect it will clear in the jug.

The traditional mead has been inactive for some time, and had cleared quite a bit. Checking the SG on it and it’s children showed that all had not budged from their SGs of 1.003 (1.004 for the vanilla & nutmeg) since back in April. So…time to bottle. My wife and I tasted each, and determined to sweeten the vanilla and nutmeg metheglin, while leaving the lavender and unaltered mead alone. I decided, having wanted to test it out for a while, to bottle only 1G of the traditional mead in wine bottles (both the metheglins I meant to do in wine bottles). That left another 2G of traditional mead to be primed and placed in crown capped bottles.

So the first thing was to rack the vanilla and nutmeg metheglin off of the small amount of lees. To this I added a 1/4 tsp of potassium sorbate and 1/20 tsp potassium metabisulfite, and then air-locked again. Later in the day, once that had had a chance to work into solution fully, I added 3 oz of honey (mixed in a 1/4 cup of water) to sweeten. That needed to sit for a couple days, so I moved on to the rest of the mead.

I started with the lavender metheglin. With it having been stable for so long, and with no intention to sweeten, I decided to move forward without additional chemicals. Hopefully that doesn’t bite me, but I’m comfortable with my decision. I bottled 5 wine bottles, corked and labeled them and left them vertical for the night. I did try using my new bottling siphon, but must admit that I didn’t really like it.

I moved on to the rest of the mead. I bottled off 5 bottles (1G’s worth) without the addition of chemicals, corked and labeled. Later that evening I finally got to the remaining 2G. That produced another 22 12oz bottles.

A couple days later, on the 25th of June (yes, yesterday), I got back to the vanilla and nutmeg metheglin. Five bottles later, I was done with the traditional mead.

In labeling, I went online to calculate the ABV. Came to 14.14% using the “standard” equation. But apparently there is a more accurate equation for “high gravity” ferments; this would definitely qualify, having started at with an SG of 1.120. Using that equation, the ABV is more like 17.17. I bottled as 14%, using the standard equation. But I’ll keep that in mind after aging. Bottom line, and note to myself: careful when you pop a 12oz bottle of carbonated mead.

The “hefty” braggot, which I had just started back when I posted on the 8th, continues to bubble, quite a bit. More than any of the other braggots did. Actually, the other braggots had a very inactive secondary fermentation. Not so the hefty braggot. It is also much more “yellow” in appearance than the others ever were. This yellow hides a brown though, because in the first days after racking the yellow began to settle. I though it was going to clear, but then the bubbles picked up and it returned to the yellow it remains so far.

Having done some all-grain brewing through the braggots, and being interested based on my reading, I decided to try a brown ale. Not much of a beer drinker, though I must admit I like Belgian beers – and the darker the better, Belgian or not. I’ve had the grains for two weeks, so I needed to use them or lose them. So, its been a busy night – and it isn’t over.

I got a late start (9-ish), but thought based on the times given that I could be done by 11:30 or midnight. No such luck for this first-timer. It’s now 1:15 and I’m still in the middle of the hops boil. I still need to cool before moving to the carboy and adding the yeast. Ugh.

It has not been the best of experiences, so far. I thought it wouldn’t be that bad, having done the braggots. But the sheer volume of liquid and grains for this brown ale is staggering, and no pot or container was big enough. My wife went out and got me a coolor to use as a lautering tun. Nice cooler. Abject failure as a lautering tun. Well, it’s my fault I guess. The mash plugged up against my siphon when I was sparging (even before) causing the whole thing to become a dismal mess. The kitchen floor is now cleaned, and no longer sticky. Add to that the lackluster results getting the mash temp correct first-time, and I have not been happy with myself or this attempt.

But to start again, I mashed 8 pounds of pale malt and 3 pounds of 120 crystal malt with 5G of 160F water. I expected, based on some calcualtions and suggestions, that the mash would end up around 152F. It did not, settling instead at around 142F. I added maybe 3/4G of boiling water and finally reached 151F. The rest of the mash-in went fine. Sparging was the disaster I have already recounted, but I seem to have plenty of liquid (I sparged with a little under 3G, taking into account the amount of water added to raise the temp).

I started the hour boil, adding 3oz of Cascade hops. The owner of the supply store suggested Amarillo as a finishing hops, but suggested adding in secondary ferment. I thought about it, but am likely going to be out of town and unable to interact with it should something odd happen. So I’m going to add it in the last 2 minutes of the boil.

Then it will be on to cooling (as quickly as possible…) and pitching yeast.

In any case, this post has gone on long enough. Adieu!