I’m not much into sports, nor football in specific, but it’s hard not to share in the joy of the community over last night’s game between Clemson and UGA. Now, with that out of the way…

This week has been busy with checking of ferments and work on the plum wine. I didn’t touch every carboy and jug, but I did check most. Here are the results:

So the pattern seems to be that the blueberry batches are taking longer than the other ferments started at the exact same time (the cherry and the blackberry). Not sure why the blueberry wine is so far behind its partner, though. It seems to still be fermenting. I may need to check on the pH and/or add some more yeast nutrient or something. 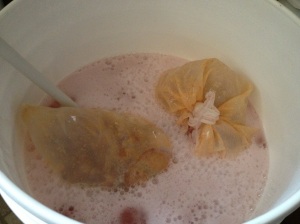 So that is it. Lots of activity. Concerned about the blueberries. They just aren’t acting as I expected. Most of the ones I racked last Sunday have given me some pause. In each case, I sanitized equipment with Star San, and for days had little bubbling after the racking. It was nearly weekend before I could clearly say the blueberry was back bubbling. The cherry and blackberry still show no signs of bubbling, but one can’t expect them to do much more with an SG of 0.995! I guess those two will be candidates for bottling here soon. The hefty braggot has yet to visibly bubble again. But it seems to be still at work, so maybe the 5G carboy is just providing more space for the CO2 to be caught in solution.

And I didn’t notice any lack of bubbling with the plum wine, which aggressively bubbled. I sanitized in the exact same fashion. Probably just worrying too much. Things seem to be working fine.